Foods You Have to Try When You’re Visiting India 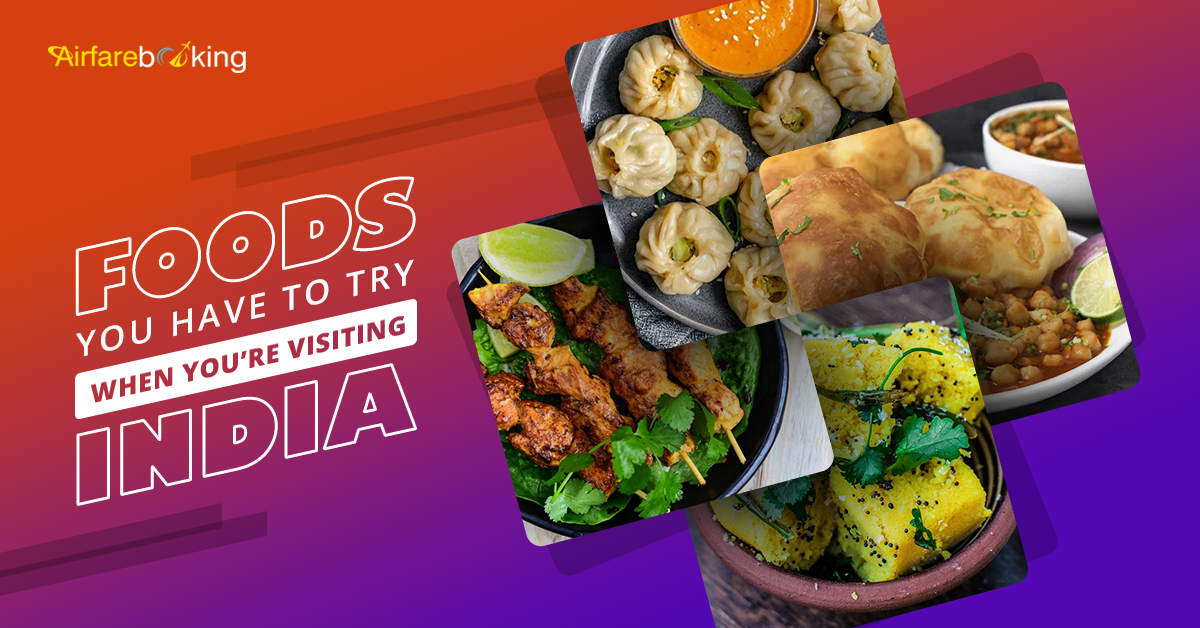 When you’re planning to visit India, Indian cuisine is among your top priorities to be explored. And why not? It offers succulent meats covered in saucy rich marinades, deliciously mouthwatering desserts, and so many snacks to choose from. India continues to amaze approximately 10.89 million tourists who visit India in a year, apart from its own people.

The mellow dishes like Palak Paneer to spicy ones like Rogan Josh, you can be sure to have a variety to choose from. Another thing to note is that the cuisine is different in every region, from Hyderabadi Biryani to Punjabi Makke di Roti and Sarson da Saag, from Bengali Luchi Aloor Dom to Rajasthani Dal Bati Churma and South Indian dishes like Chettinad Chicken and Dosa.

Here’s a few of our top picks from India to get you a taste of the culture, so go buy a plane ticket to India now.

A spicy medley of thick vegetable curry accompanied with heavily buttered bread with a slice of lemon and onions on the side, Pav Bhaji is popular everywhere in India.

Idli Vada is a popular dish in South India, usually served for breakfast with an accompaniment of cold coconut chutney and tangy tomato chutney along with a hot spicy lentil broth called Sambhar.

Dosa is a crispy thin paper pancake stuffed with a filling of mashed potatoes, coconut and peanuts along with other vegetables.

Stuffed Paratha is bread made of either whole wheat flour or refined wheat flour. It is stuffed with a filling of either vegetables or meat, like potatoes, cauliflower, paneer, chicken, egg, etc.

It is a traditional Punjabi dish, made with bread of maize flour and served with leafy greens prepared with mustard leaves.

It’s hard to find someone who doesn’t fall in love with Tandoori Chicken at the first bite.

Although the original preparation requires roasting it in a clay oven, you can also prepare it by marinating and roasting it on a regular grill or oven.

Rogan Josh is an authentic Kashmiri dish, made with aromatics spices and red meat, usually lamb or goat. It is colored with Kashmiri chilies and alkanet flower and root.

It is one of the signature curries of Kashmiri cuisine. It is a fiery dish, prepared first by Mughals and then influenced by Persian cuisine.

It is an aromatic rice dish, slow cooked with lots of spices, saffron and marinated mutton and prepared in a sealed vessel. Available throughout India, it has many variants in the original recipe.

Literally meaning red meat, it is a traditional fiery Rajasthani dish of mutton curry, prepared in gravy of yogurt and spices including red Mathania chilies.

Macher Jhol is a fish curry prepared in flavorful tomato gravy, popular in West Bengal. Bhaat is steamed rice, which is usually served alongside.

The Kofta are made with a mix of potatoes, paneer, carrots, peas, sweet corn and beans, cooked and mashed together to form a smooth paste, thick enough to form balls

They are then fried and added in silky gravy of tomatoes and cream.

Derives its name from ‘rumal’, meaning handkerchief in Hindi, it resembles a large thin handkerchief and served folded like one.

It is a very light bread, served with curried and gravy dishes. They are cheap to buy but truly tasty.

A dessert made with shredded carrot, ghee, milk and sugar with lots of dry fruits (mostly almonds) is popular everywhere in India.

Although it is available the whole year, it tastes best in winter when the carrots are freshly produced.

They are sweet, syrup covered balls made from khoya (milk solids gained by evaporating the water content of milk completely) which is deep fried.

It is soaked with syrup flavored with cardamom, saffron and/ or rosewater.

Rasmalai is one of the traditional sweets of West Bengal, containing rasgullas covered in dollops of rabdi (a dessert in itself made by thickening milk) and flavored with saffron and dry fruits.